While eyes are windows to the soul, crafts are the doorway.

This whole project started out as a endeavor to a workshop in Massachusetts where I learned much about the art of blacksmithing that I would never have found on my own. 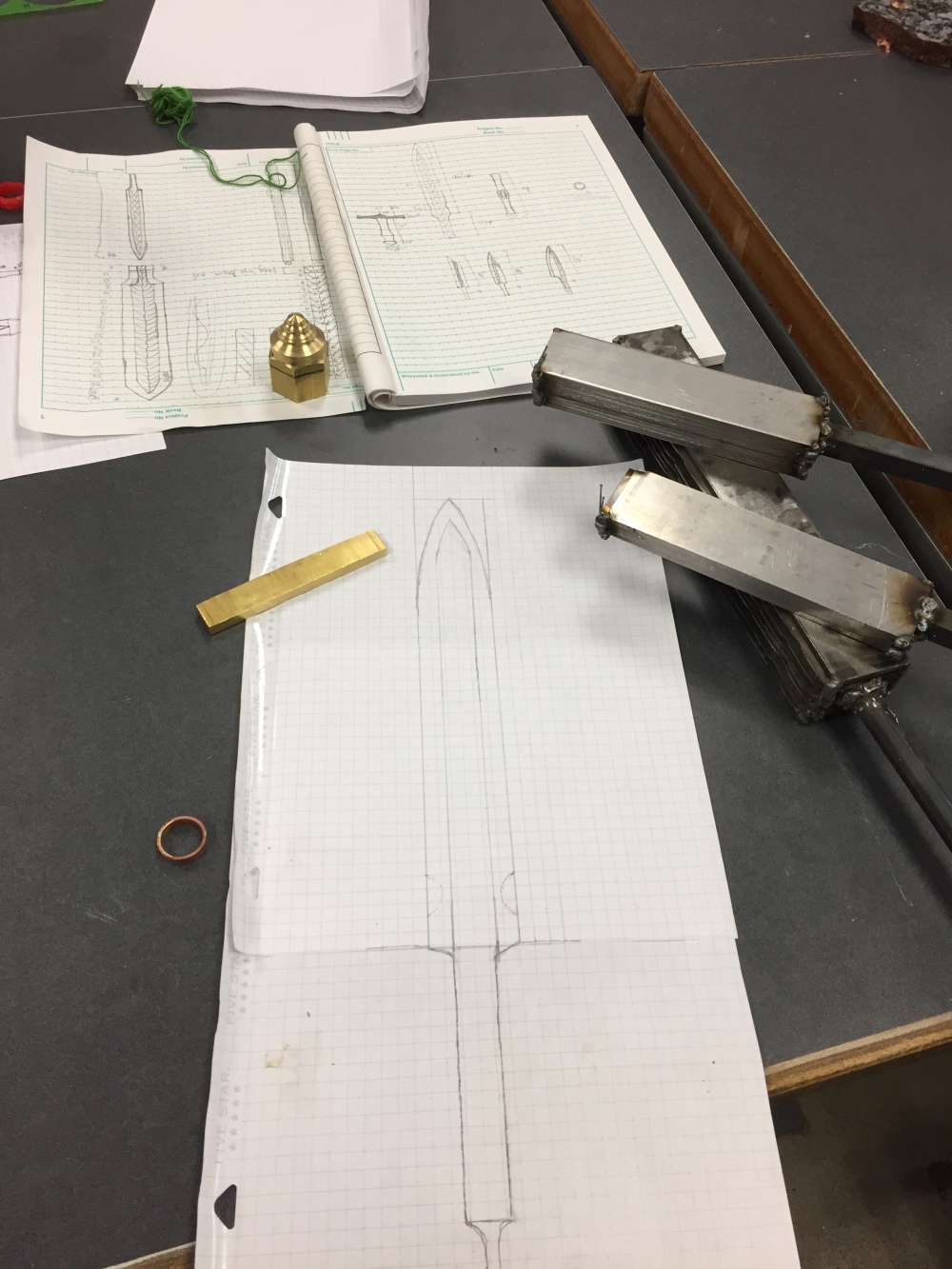 It was then welded together at the corners with a handle welded on the end and a full scale drawing was made. quoted from Steven Brust: “Plan. yes. Good idea. I should come up with a plan.”

This was the result of forge-welding and drawing out the bar of steel earlier and twisting it. As the very short piece of extra steel might suggest, something went wrong. In fact it did and while I was twisting one of the original bars it got too cold and sheared on me and I had to chop off another length of the drawn out bar to twist. I then welded the two twisted bars together and prepped them for later. 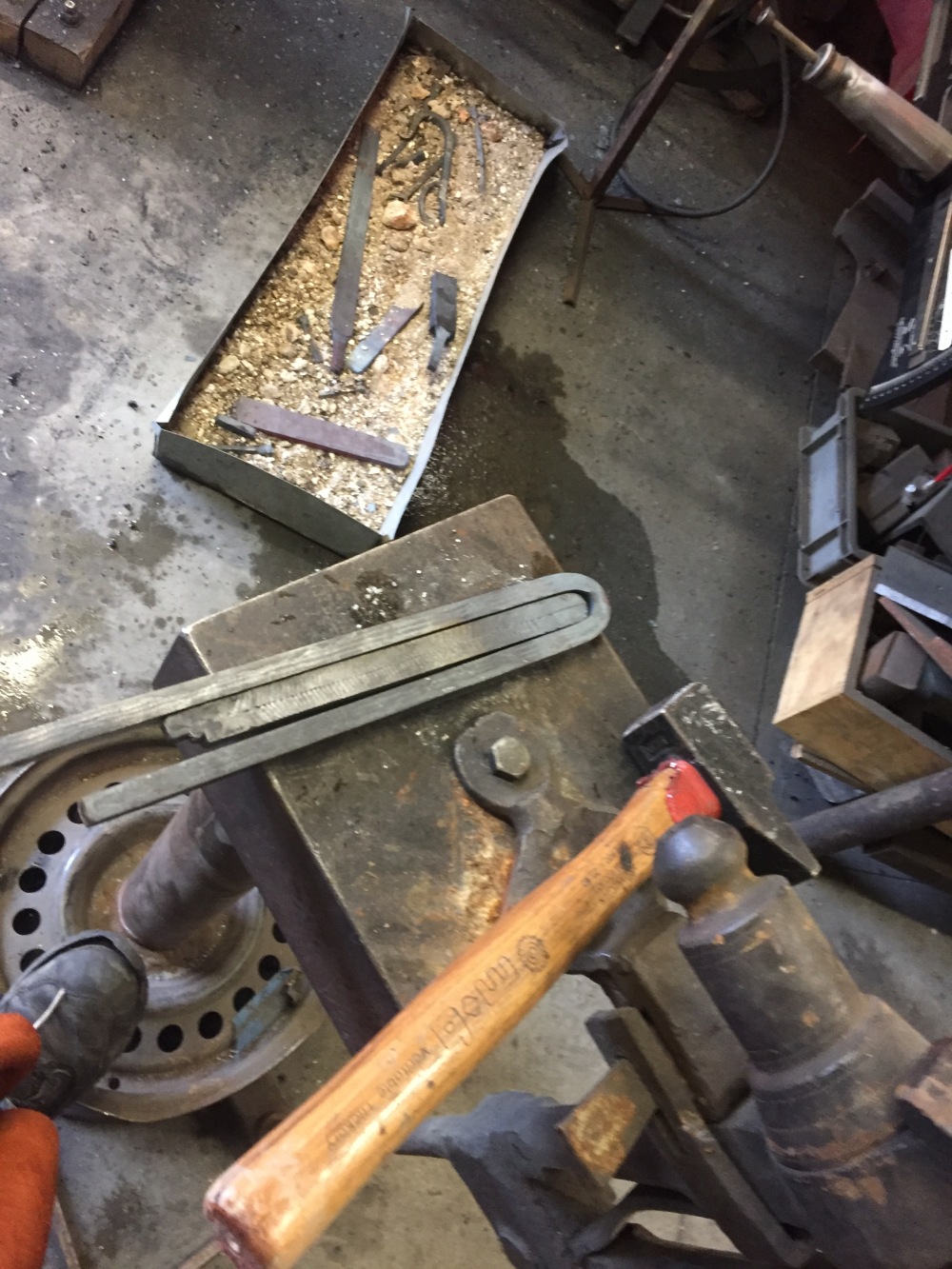 Next I welded together a billet of 9 layers alternating 1095 and 15N20, turned it on edge and bent it around the core billet while heating it with torch to keep it from snapping. 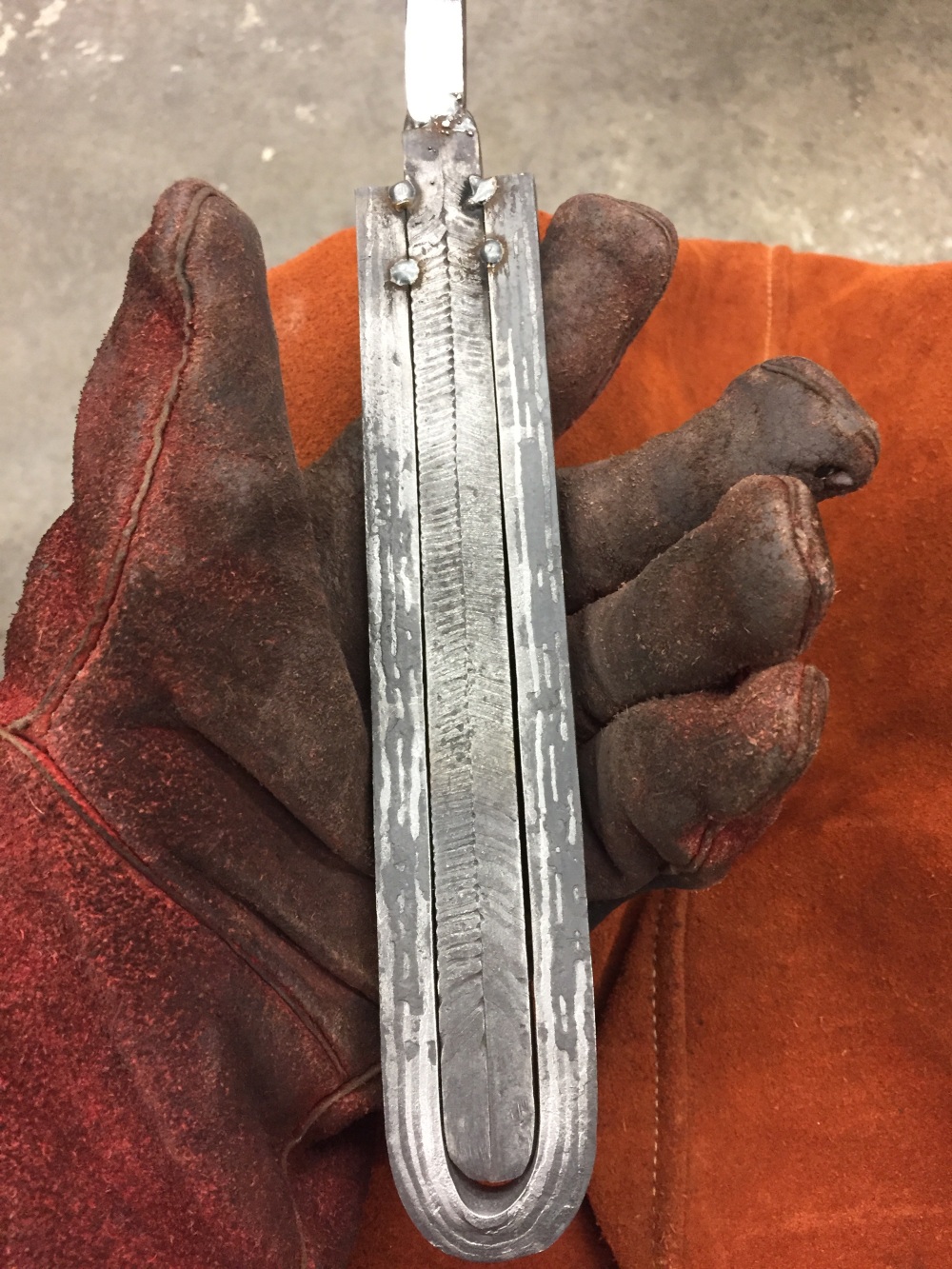 I cut the end of the billet to leave me with the proper proportions and TIG welded a handle on it (after forgetting to turn on the gas a few times). As a side note, you can see the edge pattern post-sandblasting

After attempting to weld it and having an absolutely terrible time getting the tip to weld (you can see a spot at the tip where it actually didn’t weld) I got some help from a friend who knew what they were doing considerably better than I did and he managed to get the tip welded. I helped bring the weld down along the sides to stick the jacket fully to the core and at the end of the day this was what we had to show for it! 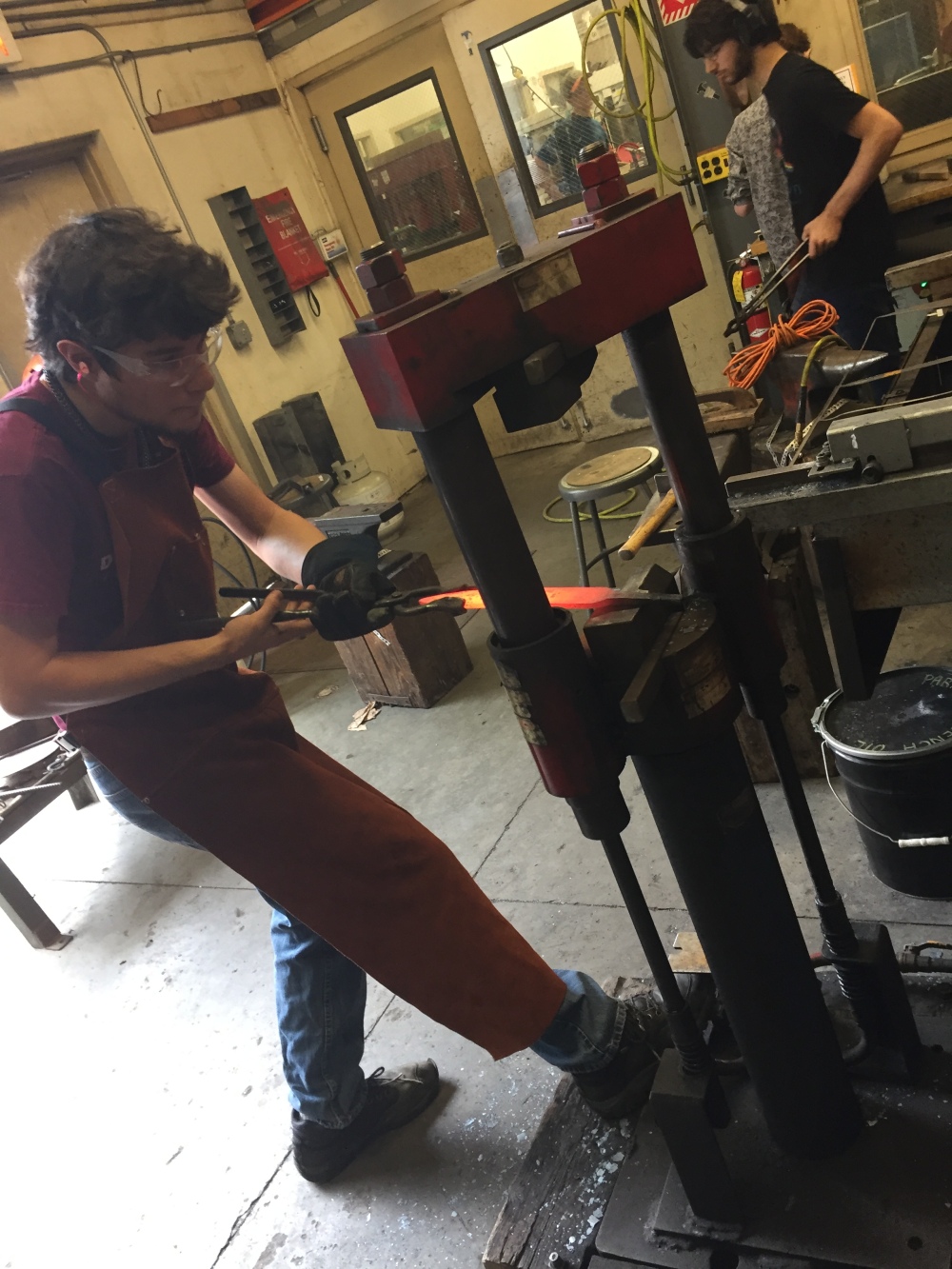 I had to draw the blade out a bit before I was ready to proceed so I threw it back into the forge and asked a friend to take a picture for the blog.

After heating it back up and figuring out where I wanted to put bevels into this project I grabbed a hand hammer and began the long process of holding the blade at angle to the anvil and tapping measured blows into each side periodically. You can see the pattern as the surface oxidizes at different rates.

After profiling came the lengthy and burn ridden task of flat grinding the face of the blade as to get a blank slate to lay out geometry (expect for the fact that the bevels exist already. Sorta), As I ground the blade, I would periodically dunk it in acid as to make sure I knew where the pattern was.

Grinding these blades has always been a pain for me, but I enjoyed every second of it! I wont lie and say I was going for the flared flat at the tip, but I think it gives the interesting illusion of a leaf shaped blade. Ready for heat treatment! 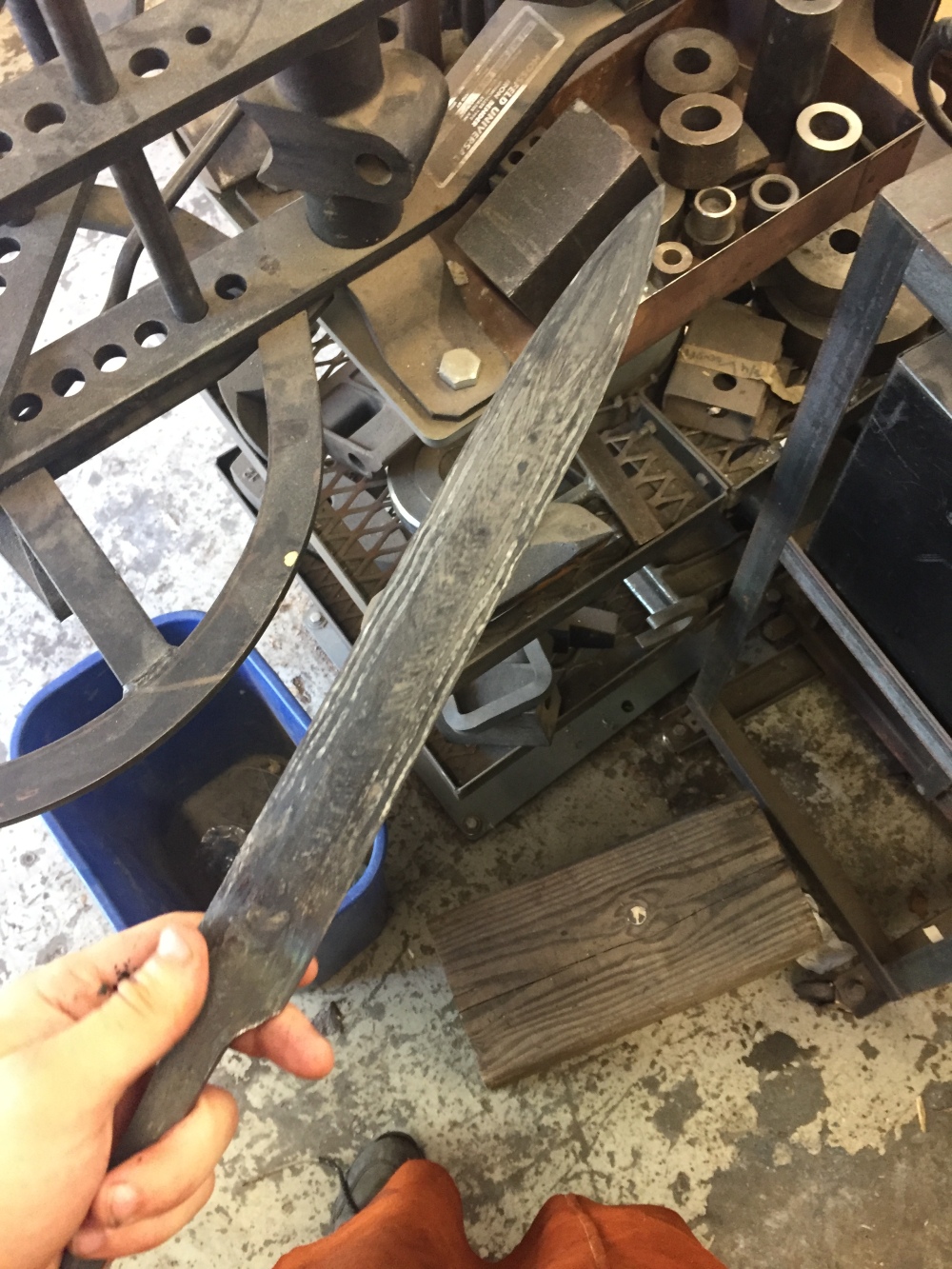 The process to heat treat a blade like this is to heat it evenly to about 1450 degrees F, then let it cool to just above warm before heating it back up and repeating the whole cycle about three times. After you finish that you heat it evenly again to 1450 and hold it there for a few minutes before dunking it in a special oil called Parks #50 Quenching Oil for about fourteen seconds.

The point of heat treating is to convert the soft face centered cubic crystals of iron and iron carbide (Austenite) into a hard body centered crystal (martensite). This is going to get a little metal science-y, but do not worry, I will try and keep it brief.

At pretty much every temperature that is not exceedingly outside and above the realm of room temperature iron/steel exist as austenite, but as you heat it up to 1450 F it becomes martensite. When you cool the steel below 400 F in less than two seconds you freeze the martensite in place and it becomes exceedingly hard until you temper it.

The thing is though that when you drop below 400 F the martensite has not yet decided it really is martensite and you can lovingly convince it (read: hit it reasonably hard) to move as though it was still well over a thousand degrees. This is usually used to take any warps out of it.

The photo above is a few minutes after all of this took place.

After pulling out the ‘ol sandpaper and going to town on the knife for a few hours I felt pretty confident in the 400 grit finish and went to etch.

Finally we get to the finished project! Huh, this looks familiar. The handles are Honduran rosewood for the record. I thoroughly enjoyed making this and hope to make more like it in the near future (although finding a power hammer and neighbors that will not kill me for using it will be interesting).

Until the next project,